Breed Easy with the AI Saddle 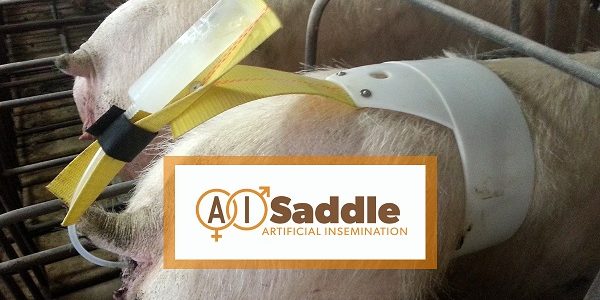 Every single solution in the PigEasy product line begins with a similar story. There’s a production headache in our sow farm and Dad becomes determined to 1) get to the bottom of it, and 2) figure out how to fix it.

The AI Saddle was our very first solution we ever brought to the market, over a decade before PigEasy was formed.

Dad was looking over our production charts in the early 2000s, frustrated with breeding numbers. Not accepting the status quo, he dug deeper and realized the sows toward the end of the breed row were the ones struggling. After spending a lot of time observing, he came to the conclusion we weren’t mating the sows fast enough. They were getting tired and entering the refractory period before we could get to the end of the row, which hurt litter numbers. He had to figure out a way to speed up breeding without adding labor.

Dad got to work in the shop and came up with a PVC saddle that would sit snuggly on the sow and hold up the semen bottle. Once he got a working model, he made a bunch and the staff began to use them. The breeders could get through the row quite a bit faster with less effort, fixing the production headache.

Not long after, a consultant was doing a farm walk through and noticed these weird saddles. Dad told him the story, the consultant said, “You should sell these!” And that’s exactly what Dad did.

He made up a little production line for his kids to work on in their free time and began to sell them through a couple distributors. Once Dad’s free labor went off to college, he decided the PVC pipe was too labor intrusive (we all wish he would have thought of that sooner!) and he decided to get the shell made from injection molded plastic. The rest is history.

The AI Saddle is the top hands free breeding saddle for artificially inseminating sows and here’s why:

1. It fits snug. Customers like how the AI Saddle is close-fitting on the sow because it stays in place while simultaneously applying needed stimulation. Breeders can successfully mate multiple sows at the same time.

3. It lays flat on the sow.  Some sows decide to rub on the side of the divider or even lay down in the middle of mating. While other breeding saddles tend to get knocked off or broken when a sow gets squirrely, the AI Saddle and semen bag or bottle stays intact and in place.

4. The materials are Durable & Heavy Duty.  We hate replacing parts and pieces just as much as you do, so that’s why we strive to create products that are long lasting. The injection molded plastic shell and special stiff strap of the AI Saddle ensures it’s going to be utilized in your sow farm for years. We have decade old saddles in our sow farm that have paid for themselves many times over in improved production – you’ll see similar results!

5. The saddles stack together for easy moving.  Even if you are working in the same row every week to breed sows, moving supplies from one end to the other can become cumbersome. The PigEasy AI Saddle stacks on each other and can easily be carried on your arm, freeing up your hands for the other supplies.

The AI Saddle and HUSKY Saddle make artificial inseminating easy because that’s what we strive for every single day:  making daily tasks easier so you can free up your day to other important tasks. Make breeding (pig)Easy and try out the AI Saddle today!