You are here:
Culling sows have been brought up in a past blog post as the MealMeter has catapulted Klocke Farms’ (KFI) pigs per sow lifetime past 60. While many focus on Pigs per sow per year, pigs per sow lifetime is an equally important number especially in terms of cost of production.
Love or hate it, farm records tell a true tale of successes and areas of improvement throughout a sow farm. These records served as the starting point to most of our products. Dave would see an area of concern, dig deeper into it and come up with solutions.
Recent KFI PigChamp records have us looking at sow longevity from a different angle, one that we feel is important to point out and discuss.  There has been a lot of buzz in the industry on early culling and we discussed it briefly in a post last year. We stressed that because a sow does not reach profitability until after her third parity, maintaining good condition is extremely important.  Looking beyond parity performance, pigs from multi-parity sows have higher wean weights and perform better in thegrow/finish sector.
While looking at the Quarterly Culls by Parity spreadsheet, we were able to compare the number of culls by parity from 2011 through 2015. Not surprising to us, the total number of culled sows dropped after the MealMeter was implemented in 2012 along with overall replacement rate.
Additionally, taking another look at the number of sows culled shows an even more significant success with the MealMeter. Since the MealMeter’s inception,KFI not only lowered the total number of culls, but they also dramatically lowered the number of early culls. This means the herd as a whole is more productive, more economical and stable. 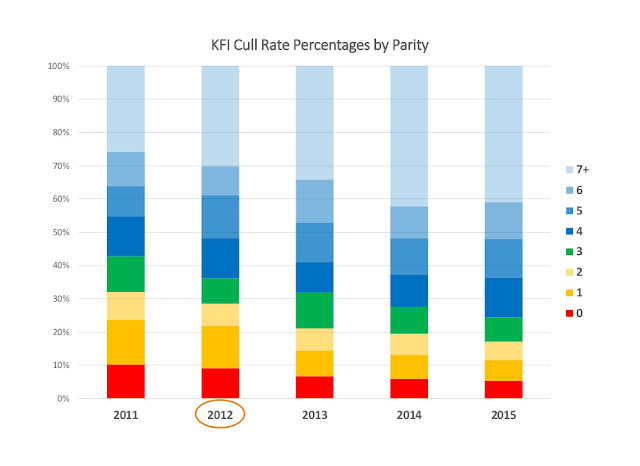 To compare these numbers, we calculated the percentage of sows culled in each parity by year. The year before the MealMeters were installed we had 1098 total culls. Out of these culls, 10.28% were culled before their first parity, 13.41% were culled after Parity 1, Parity 2 consisted of 8.36%, Parity 3 was 10.74%. In total, 42.79% of our culls were culled before that sow became profitable.
The year the MealMeter was developed and installed, the percentage of sows culled between Parity 0 and 3 dropped to 36.20%. The percentage was down to 24.45% in 2015. That’s over an 18% drop in 4 years!
Again, our farm records are telling us something. With no other major change at KFI, the farm is able to keep productive sows in the herd long past the point of profitability. The total number of sows culled is decreasing in addition to a huge drop in the percentage of lower parity sows culled within that number. Our herd is doing what it’s supposed to.

How does the MealMeter increase herd production?

The MealMeter’s overarching advantage is to avoid and eliminate limited intake days at critical times in a gilt/sow’s reproductive cycle. This is achieved by allowing each sow the ability to eat her daily ration throughout a 24 hour period without feed loss.
Dave gives the example of a sow going into standing heat as the feed is dropped in a typical gestation setting. That sow is off feed for half of a day and unfortunately that is when the sow is expected to consume its daily ration. When does that sow get the chance to catch up? If the farm waters in the trough, feed is washed down the row for neighbor sows to consume. Otherwise, the dropped feed gets stale and unpalatable for the sow. This sow just lost her daily feed ration without the opportunity to make up for it.While that sounds very little, it is a substantial amount at a significant time in a sow’s reproductive cycle.
By allowing each gilt/sow to decide when she wants to consume her daily ration with the MealMeter, you are giving her the ability to maintain and gain condition when she needs it most. Your herd is a huge investment and every gilt purchased should be looked upon as a valued asset to production. By giving each gilt and sow the tools to remain in condition when she needs it most, investment is spread over more pigs per lifetime and that makes sense economically.
This blog post is Part #1 in a series on the long term benefits of the MealMeter. Sign up for email updates to be notified when the next post is featured!
For more information on the MealMeter, you can visit the PigEasy website, pigeasy.com.
If you’d like to talk to us about its benefits on our sow farm and how we can help you get started with the MealMeter, please call 888-354-0112.
Share this post
Share on FacebookShare on Facebook TweetShare on Twitter Share on LinkedInShare on LinkedIn