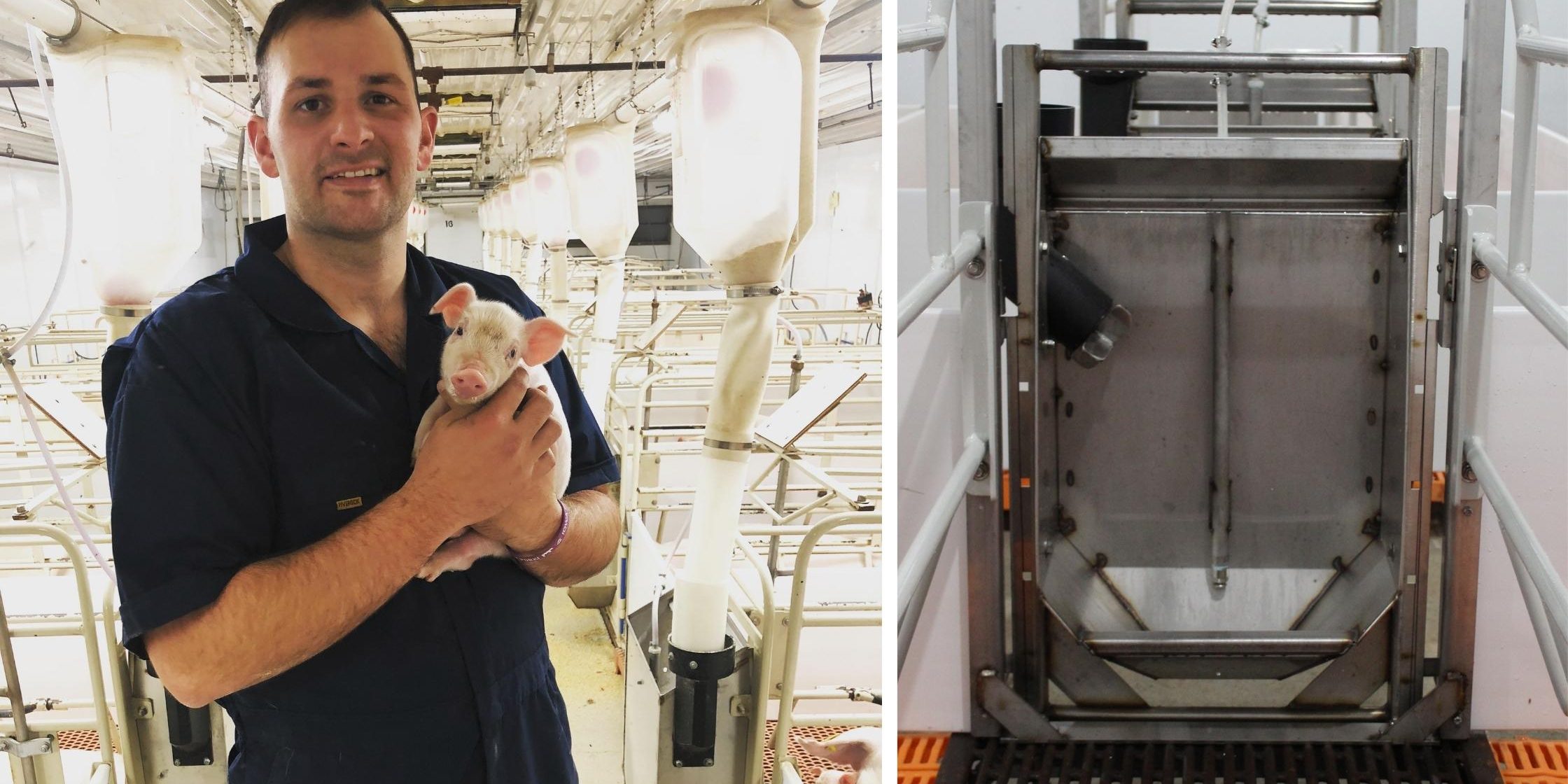 Reconfiguring all the feeding systems in a farrowing operation isn’t a decision to make lightly. When Ben Wikner’s family expanded their sow herd in 2017, however, they were ready to make a change. Their traditional drop feeders just weren’t working as well as they wanted. In fact, they were contributing to feed waste.

As the Wikners assessed their options, one choice rose to the top—PigEasy. “They live and breathe pork production, and they stand behind all their products 100%,” says Ben, who farms near Farmersburg, Iowa, with his father, Clark, and brother, Neal.

As the Wikner family prepared to add 160 farrowing stalls, they knew they wanted to get a better handle on their feed management. “We had made a makeshift system to try to control feed waste, but it didn’t work the best,” says Ben, who was named one of the 2019 Pig Farmers of Tomorrow by the National Pork Board.

The feed waste challenge was an especially big issue in the summer. “When it’s hot, sows don’t always want to eat everything you give them,” Ben says. “You have to constantly clean out feeders.”

Hot weather wasn’t the only challenge. “In our old system, 6 pounds of feed would drop five times a day,” Ben says. “If a sow would go off feed, that’s 30 pounds of feed she wasn’t going to touch.”

When the Wikners heard about the MealMeter Automatic Sow Feeder from PigEasy, they decided to install them in their 160 new farrowing stalls. They liked the way the ad lib system allows sows and gilts to eat at will. They learned that this option helps achieve maximum feed intake for pre-breed gilts, weaned sows, under conditioned sows and lactating sows.

The Wikners also appreciated PigEasy’s attention to detail, including no sharp corners on the equipment. “The PigEasy team really thought everything through,” says Ben, who first connected with PigEasy at a pork industry trade show. “We took a look at the MealMeter and knew it was going to work for us.”

The MealMeters that the Wikners installed paid off quickly. “They allow the sows to dole out the amount of feed they want to eat,” Ben says. “This helps keep the animals in good condition and has easily cut feed waste by at least 5%.”

While sows like using the ad lib feeding system, they don’t just play with it. “You’d think they might, but they don’t,” says Ben, who started farming full-time a few years ago after earning his ag studies degree from Iowa State University. “It’s a great way to provide the animals with the right amount of feed.”

All this has translated into better weaned pig weights and better animal performance, Ben adds. The MealMeter system has worked so well he installed the system on all the farm’s farrowing stalls (a total of 440 stalls).

“It would have been less hassle to keep the old equipment we had,” Ben says. “But after seeing the advantages of the MealMeter system, retrofitting everything was the way to go.”

The Wikners appreciate the MealMeter system’s durability, simplicity and effectiveness. “It’s also nice to know we can call Dave or Katie at PigEasy anytime we have questions,” Ben says.

The Wikner family has installed additional PigEasy equipment, including the BrEasy targeted ventilation system in their swine nursery. This sliding baffle focuses the pit fan’s airflow to draw out the coldest, heaviest gases from right above the manure line. BrEasy creates a healthier barn environment for people, pigs, and pits, with a rapid return on investment.

“The ideas Dave comes up with are amazing,” says Ben, referring to PigEasy’s founder, Dave Klocke, a pork producer from Templeton, Iowa. “I love the fact that PigEasy’s products work as promised. I look forward to seeing what they come up with next.”