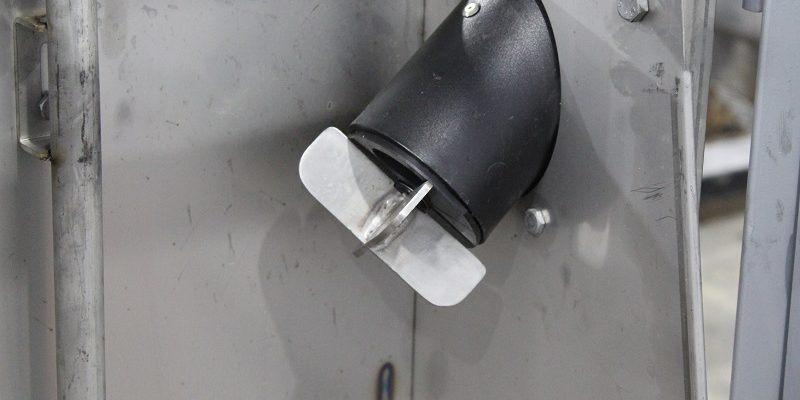 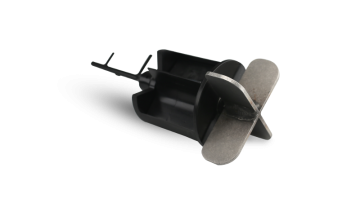 Over the last few years, we’ve fielded a lot of questions on the MealMeter feed dispenser. There are many I myself would ask if I was in the customers’ shoes.
For those of you who are intrigued, but haven’t caught up with us at a trade show or aren’t ready to make the call yet, here are answers to the top five questions on the MealMeter feed dispenser.

1. What exactly is the MealMeter and how does it work?

The MealMeter is a feed dispensing device that is latched (more on that later) in a drop feed tube in the breeding area of a sow farm. It was developed to convert the feed tube into an ad-lib feeder.
Ad-lib feeding is popular in lactation because it is known to optimize feed intake at a time when sows need to consume a lot of feed in order to milk a healthy litter and not lose condition to be ready for her next cycle. However, little was done before the MealMeter to improve feed intake for pre-breed gilts, weaned sows and under conditioned sows in the breeding area even though feed intake is very important at this time in her reproductive cycle.
The MealMeter allows these sows the extra time needed to consume their daily ration. Just like in the finishing barn, some sows are “snackers” and some sows are “gorgers”. By giving her the freedom to choose when and how much to eat, she’s able to maximize feed intake so she is in prime condition to have another productive litter.
The breeding area of the sow farm is where you can typically expect a lot of wasted feed because it’s where we all try to push the limit of feed consumption, but not in the way she needs it. Dropping a large amount of feed to her one or two times a day is labor intensive because you’re going to end up cleaning a lot of it out later when it becomes stale or rotten. Hand feeding is labor intensive because staff is hand scooping their estimate of what she is going to eat in each stall multiple times a day in order to drive feed intake yet attempt to lower waste.

The MealMeter takes the human element out of feeding sows. It saves on feed waste while at the same time pushes intake. 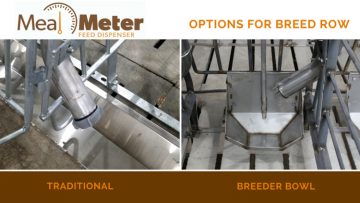 There are a couple different ways to set up the MealMeter in the breed row. We’ll dig deeper into these two options later. In the meantime, here’s a comparison between the two. Feel free to call (888) 354-0112 with any questions.
The MealMeter is also offered in farrowing where it is inserted into an accompanying product, called the Lactation Boot, and installed onto the sow feeder. To optimize feed intake, we suggest using the PigEasy Sow Feeder, but the MealMeter and Lactation Boot can be retrofitted onto most existing feeders, along with the lactation water bracket.
The key to feeding sows in lactation with the MealMeter system is the water pipe in the feed bowl. The button nipple at the bottom of the water pipe requires the sow to “self-regulate” the feed flow into the sow feeder. Every time the sow goes in for a drink, she is cleaning up her eating area so it is ready for her next meal.

This is probably the most popular question we’re asked about the MealMeter. I believe it’s because of producers’ previous experiences with ad-lib feeders where they see sows continue to fill up their bowl and never fully clean it out.
Is the sow playing with the feed? In our experience, not exactly.
Before I explain how the MealMeter is set up to not allow the buildup of feed, I’m going to first explain the issue with ad-lib feeders in general and feed build up.

We’ve observed many sows consume feed with different feeders and we’ve come to the conclusion they aren’t playing. They’re layering. 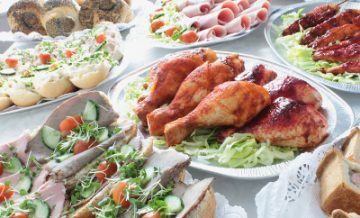 Consider this: if you had a never-ending buffet at your fingertips, would you spend the time cleaning up your plate or would you keep your eye on the untouched, new food?

With ad-lib feeders, sows are dispensing the feed, eating a little bit, then heading back up for the fresh stuff without ever cleaning up what they originally dispensed. That’s where you get this layering effect and a bowl full of half eaten feed.
In breeding, the MealMeter’s set up options combat the layering issue in two different ways. 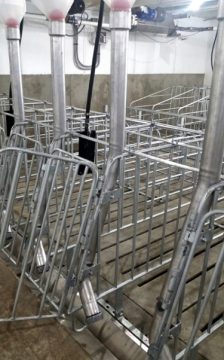 The traditional set up has the MealMeter drop feed into a dry trough. Sows are watered via the SnoutSpout nipple bracket installed on the divider. The custom built feed tube has a viewing window toward the front aisle, so as the staff walks the row throughout the day, they can set the boxes to either push intake or hold back depending on the amount dispensed. Like Dad says, “You can either take seconds managing feed at the feed box or on your knees cleaning out the wasted feed that day.” With the MealMeter, feed is staying fresh in the tube until the sow is ready to eat. The traditional set up is where we got our start with the MealMeter and led Klocke Farms to a 1.75 total born increase with P1 sows.
We knew we could do more though. After coming to understand the layering effect and setting up the sow feeder in farrowing to “self-regulate” with the water pipe, we wanted to mirror that success in the breed row. So, we developed the Breeder Bowl.

The PigEasy Breeder Bowl is a personal sow feeder that is installed on a gestation stall head gate. By serving as both her feed and water bowl, the individual waterer in the Breeder Bowl acts as a “dispensing regulator” for the MealMeter so she does not over-dispense and cleans up her feed with every drink. Feed does not build up in the Breeder Bowl because there are no deep corners.

The Breeder Bowl can be mounted on both straight front and sloped front stalls. This eliminates the need for a trough. Existing troughs do not pose a problem as the Breeder Bowl can be installed above the trough with enough clearance to open the gate. The Breeder Bowl is small enough to not lose any boar exposure and will not protrude into her stall space.
This new set up provides sows the freedom to choose when she wants to consume her feed with little to no daily management.

3. How much feed does the sow dispense at a time?

I have to begin with a disclaimer that the answer depends on your feed type and density. However, we’ve measured our own feed to get a general estimate.
There are four moving chambers inside the MealMeter. As the sow spins the MealMeter nose, the chambers are filled and the feed is dispensed from the top opening of the MealMeter body.  Each of these chambers holds roughly 1/3 oz. Therefore, the sow will dispense 1lb of feed with 12 complete spins.

Watch this video of the MealMeter in the breed row. You’ll see the sow spins the MealMeter 2-4 times before actually eating. She eats for a little bit, then heads back up for another 2-4 spins.

We’ve found the amount the the MealMeter drops to be a sweet spot as it’s enough to satisfy her so she doesn’t get frustrated and not too much that she inadvertently over-dispenses.
Another question we get asked that usually follows #3 is “How much does a feed tube hold?” We custom manufacture 3 inch OD stainless steel feed tubes for the MealMeter and can estimate that each foot of 3” OD tube holds 1.65lbs.

4. How is the MealMeter removable? 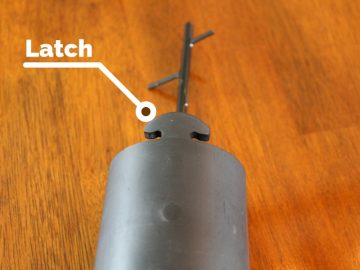 The MealMeter has a latch on the top of the body and is latched onto the stud that is installed at the top side near the opening of the custom feed tube and the Lactation Boot. 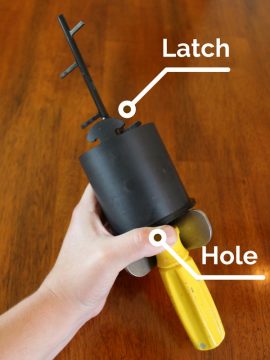 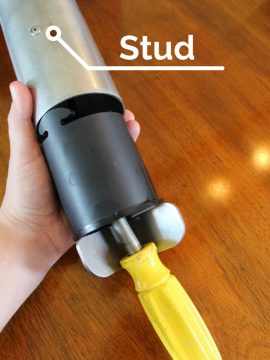 Sows tend to be a little hard on equipment, so we completely understand why this is a top question. Taking that into consideration, we made the MealMeter into four separate parts that are easily replaceable.

There are two options to the the MealMeter nose, plastic or stainless steel. Most people choose the stainless steel option, but there are certain situations where plastic is most beneficial. Klocke Farms uses mostly plastic MealMeters. The nose is attached to a stainless steel square shaft that holds the rest of the pieces. The chamber or elevator is assembled inside the MealMeter body. The agitator or tail is installed on the back side of that shaft. Everything is held together with a stainless steel roll pin.
Let’s pretend a rock comes through the feed line and busts the MealMeter’s agitator. (I mean, you’ve only HEARD of things like that happening, right? Us too. ?)
You need a new agitator to keep the feed flowing, so you give me a call, we send you out a replacement piece and a roll pin punch. You simply punch out the roll pin, replace the agitator, put the roll pin back in and you’re back in business.
The same goes for all of the other MealMeter parts. If you’re having issues with a certain part of the MealMeter, there’s no need to replace the entire thing. We can supply you with replacement parts and it takes little effort to fix.
__

Our goal when developing the MealMeter was to make it easy to use and manage and that’s not just because our name is PigEasy; it’s because we’re pork producers too and understand what’s important to you.
If any of your top MealMeter questions weren’t answered, send me an email (Katie@pigeasy.com) or give me a call (888) 354-0112. I’ve got more information up my sleeve and would be happy to help!
Until next time,
Katie
Share this post
Share on FacebookShare on Facebook TweetShare on Twitter Share on LinkedInShare on LinkedIn