“We can rebuild her. We have the technology.”

You are here:
Steve Austin. Astronaut. A man barely alive.
Gentlemen, we can rebuild him. We have the technology.
We have the capability to make the world’s first bionic man.
Steve Austin will be that man. Better than he was before. Better. Stronger. Faster.

Gentlemen, we can rebuild her. We have the technology. 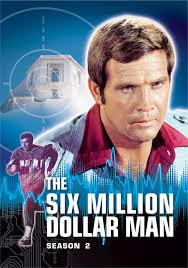 Comparing a sow to the 6 Million Dollar Man is probably a bit of a stretch, but there are similarities if you really think about it.
Steve Austin was an astronaut, someone the US Government invested in to take us into outer space and advance NASA’s interests.  After enduring a catastrophic crash of his aircraft, doctors realize Austin will only survive and continue his life’s work if extreme measures are taken. And with this tragedy comes a huge opportunity; to build the first bionic man who is stronger and faster than any human on earth.
Pork producers invest in each sow as a productive entity on the farm. Because sows do not reach profitability until after their third parity, it’s imperative to build momentum with incoming gilts and maintain that momentum throughout her lifetime by keeping her in condition at critical points in her reproductive cycle.
But what if a catastrophe occurs where she loses condition, such as an illness in lactation or can’t keep up nursing a big litter? Studies suggest if a sow loses condition in lactation, she’s more likely to be culled after her next parity.Typically, this sow is never able to regain condition throughout gestation and performs poorly the next litter. We all have the best of intentions to get her back into condition in gestation, but how often are we successful? Do we have the ability to change this trend?
We now have the technology. (Okay, “technology” might be pushing it, but we DO have a solution.)

We have the capability to keep this sow productive in the herd.

Losing condition in lactation happens, but it doesn’t have to be the end for that sow.

Klocke Farms has set up what is called a “Recovery Row” in the breeding barn. This row is intended for sows that are under conditioned, coming off of an illness or are not eating well. MealMeter feed dispensers are ready in the recovery row and feed boxes are first set at roughly 4-6 lbs (2-3 lbs per feeding). The viewing windows and troughs are monitored to assess intake. If by the end of the day the viewing window is empty and the trough is clean, the staff know it’s time to bump up the feed box to allow more feed. 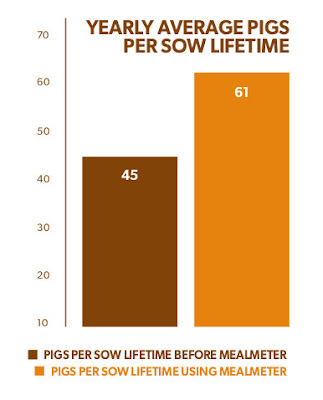 Even being under conditioned, KFI breed these sows if they cycle, knowing that the MealMeter will get them back into condition.
The MealMeter feed dispenser allows the sow to consume her daily ration when she is ready without fear of her feed going stale or being washed down the trough to her over conditioned neighbor. By giving her time and choice, KFI is able to feed these recovery sows 16 lbs or more a day and can then easily get her back into condition before her 35 day preg check.

Because KFI is able to condition these sows when they need it most, they are able to run a 35% replacement rate and are pushing over 60 pigs per sow lifetime.

This sow will be better than she was before. 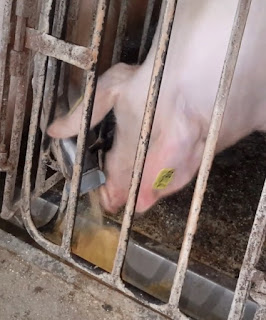 It could be argued that a gilt entering the herd, given all vaccinations, undergone the feedback program and has built immunity to the population of the sow herd, is a wasted resource if no effort is given to build her back up after she loses condition in one of her earlier parities. Sows that can get past their third parity are able to reach the next level of maturity and that is why pigs from multi-parity sows fare better than P1 progeny in thegrow/finish sector.

Klocke Farms hypothesizes that a lot of the sows that left the herd early due to losing condition in lactation were in fact the more productive sows. By giving them the extra attention they need post-lactation, we are able to “re-build” her so she is ready for the next parity and beyond.
Steve Austin was a man of skill, experience and knowledge. If they had the technology to save him and allow him to reach his potential yet chose not to try, think of how much would have been lost… Dad wouldn’t have had a TV show to watch in high school!
We have the capability to keep these sows productive in the herd. By tapping into the potential of the MealMeter, our herd is better, stronger and more productive than ever before.